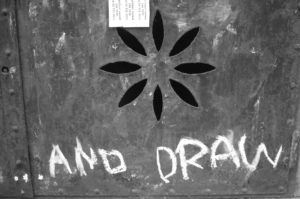 Why is that important? So many people say they can’t draw. I used to say it. Truth is when you write your name you are drawing. Everyone’s handwriting has a unique quality to it, as unique as our fingerprints. The reason it matters that we believe we can draw is that it speaks directly to how creative we allow ourselves to be or even imagine we could be. If I say “I can’t draw” then I am actually dismissing some measure of my creativity in every aspect of my life. I’m not saying some people aren’t gifted with a skill in drawing that awes most of us, but there is a continumn and everyone can draw. We usually say to ourselves something like I can’t draw that vase, it’s beautiful I won’t do it justice. So here’s the first step: DRAW THE SPACE AROUND IT! That space informs the placement of the vase but usually we haven’t put any kind of value on that space, we aren’t attached to it, so we end up forming the vase without trying. See what I mean?

the stratigraphy of a life

what’s the invitation of the moment?

a map of the great crossing*

song of ourself: voices in unison

answers from your muse

make what you make

a cycle of change tarot spread